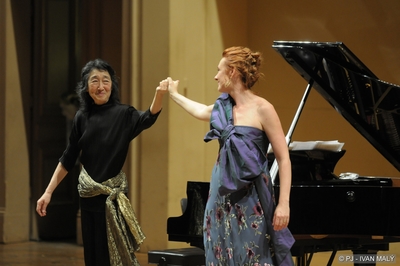 "What I like about Mitsuko is (among other things) that she loves long preparations. We would often start rehearsing a year or two ahead, which gives us much more freedom. Our programmes are always a combination of what I would like to sing, what Mitsuko would like to play and what we both feel good about," confesses Magdalena before three concerts at which she is going to sing accompanied by the virtuoso solo pianist Mitsuko Uchida.

Bilbao – Barcelona – Prague: These three cities will enjoy an exceptional musical experience right at the beginning of the year. Magdalena will be accompanied by a musician whose name is a recognized synonym for phenomenal piano play and who is not usual to be heard as a piano accompaniment: legendary Mitsuko Uchida, holder of the Order of the British Empire with the title of Dame. Uchida, renowned for her unique ability to play the grand piano giving out the sound of a whole orchestra, will accompany Magdalena not only in popular Dvořák's and Wolf's songs; both star musicians together will also perform Poems of Mary, Queen of Scots by Robert Schumann and the Cabaret Songs by Arnold Schoenberg, compositions less often to be heard in our country.

As a relentless promoter of Czech music on the world stages, Magdalena included Antonín Dvořák in the programme of their January concert: "Mitsuko was very keen to start the Czech repertoire with me as well, so we chose Dvořák's Love Songs – they are young and fresh, in comparison with other songs they bring another new colour to the programme. And after all this romantic music, I wanted to finish with something lighter, something give us a little laugh at the end. Schoenberg's Cabaret Songs are an exciting assortment: they have all the lightness, but also the accompaniment composed by one of the greatest composers of his era."

Details of the concerts can be found in the calendar.