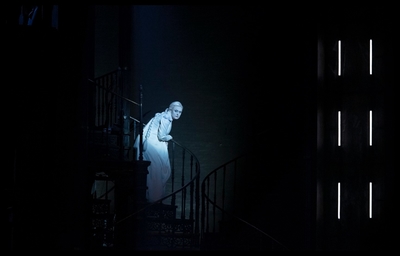 Magdalena started this year's concert season in style. Have a look and listen to all that she managed to perform within September and part of October and see what awaits her in the near future.

In the media section, there are photographs and reviews of the production of Macbeth Underworld opera by French composer Pascal Dusapin. The 90-minute work had a successful world premiere at the La Monnaie Brussels Opera House, and which is more, Pascal Dusapin composed the role of Lady Macbeth namely for Magdalena. Not to forget: Macbeth Underworld will be available free of charge online on MM Channel from October 17, 2019 to November 27, 2019.

In mid-September we informed here about the new recital CD Soirée, which is being accepted with delight. Find reviews in the media or discography section, or you can also enjoy the CD on Magdalena's YouTube channel. Today, on the 14th of October, Magdalena sets on tour with the same programme. Together with her musician friends, with whom they form a perfect “all-star team”, they are going to perform in Biel, Toulouse, Barcelona, ​​Milan, Katowice, Athens and in November also in New York. Details again in our calendar.

The new DVD is launching on which you can enjoy Magdalena as Faidra in last year's Berlin production of Rameau's opera Hippolyte et Aricie. Get lured by the EuroArts label teaser.