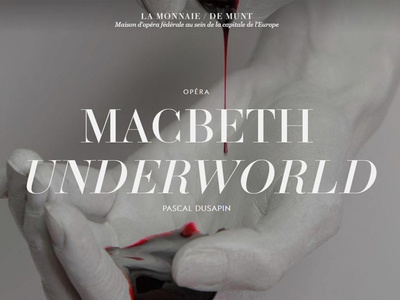 Tonight, Magdalena is going to perform for the first time in the role of Lady Macbeth on the scene of La Monnaie in Brussels, where the keenly awaited world premiere of Pascal Dusapin's opera "Macbeth Underworld" will take place.

The author composed his new stage opus with the idea of Magdalena as Lady Macbeth, as well as from the beginning he was clear about the director: Frenchman Thomas Jolly, whom the composer met several times during the composition process itself. Thus, the new opera is literally tailor-made for its staging engineers and performers.

La Monnaie´s website offers a detailed article on today's premiere of this "bloody Gothic opera", as Pascal Dusapin himself calls it.
Dates and cast here.

La Monnaie offers you the possibility to watch all of its opera productions online. Macbeth Underworld will be available from 17.10.2019 up to and including 27.11.2019 in full version and free of charge on the MM Channel.