Artists in Residence in the 127th season of the Czech Philharmonic 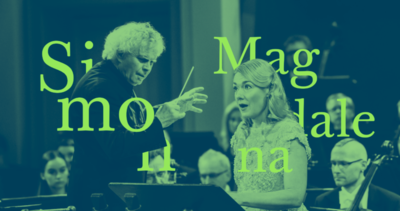 Magdalena and Sir Simon Rattle are connected with the Czech Philharmonic by several unforgettable musical projects. This concert season, they are delighted to link their names with the Czech music's premier ensemble as its Artists in Residence; they will present three different programmes to audiences in the Dvořák Hall of Prague's Rudolfinum.
"The Velvet Revolution Concerts are intended to remind us of our civilisation’s democratic values and to present a programme that supports those ideals. For the occasion, the season’s artists-in-residence have chosen songs by Maurice Ravel and Béla Bartók and the final symphony of Gustav Mahler—a hymn celebrating life and humanity," says the Czech Philharmonic about the first of the residency programmes, by which it joins the celebrations of the Freedom & Democracy Day and also marks the 33rd anniversary of the Velvet Revolution. It will be performed at the Rudolfinum on Wednesday 16 November and Thursday 17 November, when it will also be broadcast live on CT Art , takt1 and Medici TV.

In the following week of November, the resident duo will perform as part of the Czech Philharmonic's subscription series A. On 23, 24 and 25 November, they will present a selection of Dvořák's Evening Songs along with songs by the Theresienstadt composers Hans Krása and Gideon Klein. The Czech programme will be crowned by Leoš Janáček's orchestral rhapsody Taras Bulba.

Detailed information, highlights, interviews and news about Magdalena and Sir Simon Rattle's joint artist residency with the Czech Philharmonic can be found here: