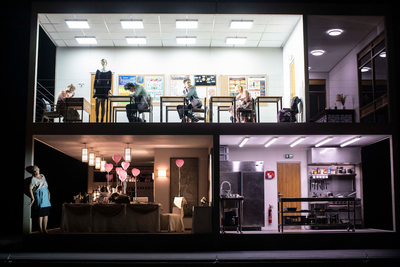 Kaija Saariaho’s Innocence, a world premiere composed to the first opera libretto by Finnish novelist Sofi Oksanen, is a true contemporary tragedy traversed by the shadows of the past and an urgency for resilience.
This five-act, one-hour-and-forty-five-minute opera is a reflection of the cosmopolitan society that inhabits large cities of the West today, sung in English, Finnish, Czech, Romanian, French, German, Spanish, Greek and Swedish. Kaija Saariaho’s production—a musical saga of rare depth composed for a large, 80-musician orchestra, a mixed chorus, and 13 soloists—reflects this linguistic diversity through its many contrasts and colours, and boasts a high-flying, international cast, led by Magdalena Kožená and the French soprano Sandrine Piau, under the musical direction of Finnish conductor Susanna Mälkki, who conducts the London Symphony Orchestra for the occasion. For his staging of this world premiere production, Australian director Simon Stone has created an ingenious set that allows two temporalities and parallel realities to coexist on stage in this new “opera-thriller” by Kaija Saariaho.

Interview with Magdalena and Kaija: