Operatic opening of the New Year 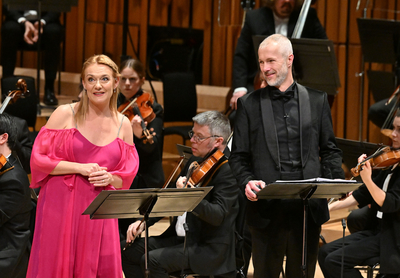 Magdalena entered 2023 in very good company: on 11 and 13 January, audiences at the Barbican, London, applauded a concert performance of Janáček's Katya Kabanova, performed by the London Symphony Orchestra and outstanding soloists under Sir Simon Rattle, with Magdalena as Varvara.

Satisfied reviews came from The Guardian and The Financial Times to name but a few.

Those interested can enjoy a recording of Katya Kabanova on Thursday 2 February at 7pm on Marquee.tv.

On 27 and 29 January, Magdalena will appear as Donna Elvira in a semi-staged production of Mozart's Don Giovanni, directed by Rolando Villazón for Salzburg Mozart Week. "Of the three female roles in Don Giovanni, Donna Elvira is the most interesting for me. Although betrayed, she forgives everything; she is a very moving character in which not only rage but also many other emotions can be expressed," says Magdalena. Her repertoire also includes Zerlina, which she sang to great acclaim in Salzburg twenty years ago under the baton of the legendary Nicolas Harnoncourt. As Donna Elvira she shone for the first time last summer in Verbier, Switzerland.

In the first half of February Magdalena will visit six European capitals. Together with Mark Minkowski's Les Musiciens de Louvre and her excellent singing colleagues, she will delight audiences in Paris, Bordeaux, Hamburg, Madrid, Barcelona, and Valencia as the title character of Handel's Alcina. Magdalena talks about the concert performance of Alcina, as well as the almost incredible number of other operatic roles that await her soon, in an extensive interview for FORUMOPERA.