"Where are You?" in the world premiere 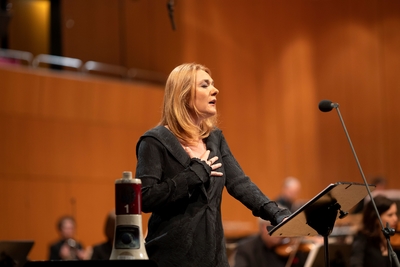 On Saturday, March 6, from 6:00 pm, Magdalena is going to perform Ondřej Adámek's song cycle entitled "Where are You?" in the world premiere. The new eleven-part work of a young Czech composer successfully working mainly abroad was commissioned by the renowned musica viva Bavarian Radio concert series, which will also present this new cycle at the Gasteig in Munich, together with the London Symphony Orchestra and thanks to the support of the Ernst von Siemens Music Foundation. The concert will be conducted by Sir Simon Rattle, who will appear in front of his favourite Bavarian Radio Symphony Orchestra for the first time since the announcement of his appointment as its chief conductor beginning the 2023/24 season.

BR-KLASSIK will broadcast the concert on Saturday, March 6, 2021 at 6.00 pm on the video livestream via the musica viva Media Center and on BR-KLASSIK Concert. The concert recording will be broadcast by BR-KLASSIK on Tuesday, March 16, 2021, starting at 8.05 pm on the radio.

More information in our concert calendar.